Australian aid saves lives. That’s why the news that our position on the foreign aid leaderboard has slipped even further is deeply concerning. When it comes to rankings regarding our nation on the global stage, we tend to focus on ladders that showcase our national sporting teams, or the rising stardom of our darling pop acts or Hollywood celebrities.

Our fall on this ladder however, is of far greater consequence, as it says something not about our athletic ambition or creative talent, but the very soul of our nation. We must ask ourselves, “Are we happy with the current trajectory our Government has placed us on?”

A trajectory and posture the rest of the world is now increasingly calling out as tight-fisted, lacking in compassion, and generally shirking of our international obligations to do our ‘fair share’ when it comes to fighting poverty and assisting with record flows of refugees worldwide.

For those of us who follow Christ, we must take it a step further and ask, “How does this reflect a humble recognition of all that God has blessed us with in this country?”

Details on the new ranking

Following on from a critical peer review released by the OECD Development Assistance Committee (DAC) last month, Australia has just been handed it’s new ranking as one of 29 wealthy member countries based on the amount of money we give as a percentage of our Gross National Income to overseas development.

The news is in, Australia has fallen a further 2 places to 19th on the global aid leaderboard, our lowest ranking ever.

This new ranking is scarcely surprising, after the recent peer review revealed that Australia’s projected aid budget will reach an all-time low of 0.22 percent of Gross National Income (GNI) this fiscal year. To put it another way, this would see Australia giving just 22 cents for every $100 of income this country earns. This is despite steady economic growth, a 10 percent increase in overall government spending in the same time period, and recommendations from DAC to pursue growth in our aid budget.

By comparison, the average giving of other donor countries in 2017 was 0.31 percent, with six DAC members reaching or surpassing the UN target of 0.7 percent (a target Australia is notionally committed to as a signatory of the Sustainable Development Goals).

Previously, Australia was ranked as the 9th largest donor back in 1995. Our new ranking places us firmly in the lower half and matches our previous historic low of 19th back in 2005. 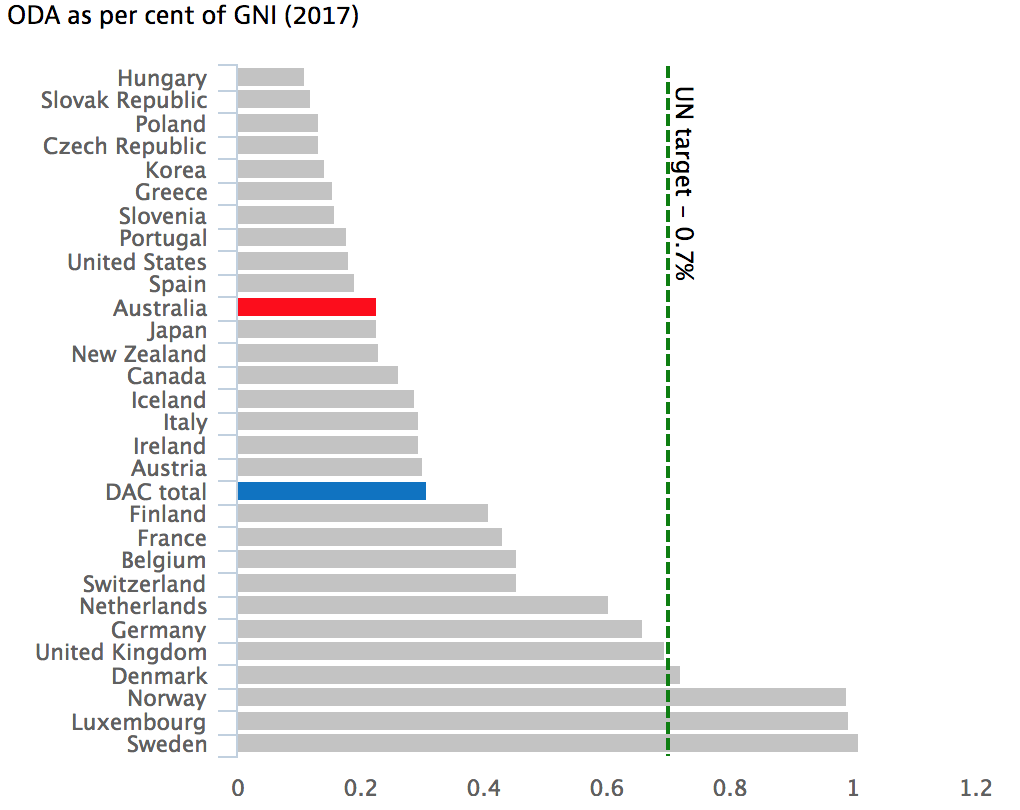 Why it matters and what we can do

In reality, on the ground aid from Australia is life-giving. The DAC review demonstrated Australia's clear focus on our neighbours in the Asia-pacific region, with commitment to accountability, and empowerment of women and girls as a priority. Unfortunately, the cutting of Australian aid could undo all this work.

Each and every recipient of Australian aid is an image bearer of God, and every single cut to funding represents the shutting of doors on our neighbours to reach their God given potential.

Not only does this downward trend of Australia’s aid assistance deliver another blow to the cultural narrative that Australia is a compassionate nation, it also disregards how we as Christ followers are to give as an outpouring from the grace we have received from God.

Generosity is a marker of a regenerate heart. The timeless story of the poor widow at the temple in Luke 21:1- 4 exemplifies that sacrificial giving is the key, not sheer volume. Jesus knows our selfish tendencies. This is why the beautiful link between grace and generosity is necessary.

In Generous Justice: How God's Grace Makes Us Just, Timothy Keller really highlights the relationship between grace, justice and generosity:

“For indeed, grace is the key to it all. It is not our lavish good deeds that procure salvation, but God's lavish love and mercy. That is why the poor are as acceptable before God as the rich. It is the generosity of God, the freeness of his salvation, that lays the foundation for the society of justice for all.”

It is not the ‘lavish goods’ but the heart of mercy, love and sacrifice that counts. And it seems our prosperous nation is giving out of greed - not freedom

In light of this shrinking foreign aid budget, Micah aims to counter this narrative with a voice that says: