Each day the federal budget draws near, debates and predictions are flung in all directions, and you can be left with little sense of what to expect. With only a week until the budget is handed down, now is the perfect opportunity to cut through the noise and take a wide view of what our politicians and industry leaders have had to say about the role of Australian aid in this coming budget.

Before the speculation of the past two months began, an important beacon of hope was released in November last year, in the form of the Foreign Policy White Paper. The paper said of aid:

“Australian aid is effective and is making a real difference to the people of the Asia–Pacific region. The changes outlined in this White Paper will give the aid program greater reach and impact in the coming decade.”

Largely praised by NGOs, it was received as an opportunity for Australia to increase its Official Development Assistance (ODA) commitment in line with foreign policy goals. A commitment for Australia’s aid to be not only larger, but more effective.

March saw the timely release of the OECD Development Assistance Committee peer review of Australia’s ODA, where we learned that Australia’s projected aid budget will reach an all-time low of 0.22 percent of Gross National Income. Reports also emerged of the Turnbull government modelling to cut a further 10 percent, or around $400 million.

Aid advocates echoed the sentiment of the review, encouraging Australia to reverse its downward trend, or face the risk of losing influence in global debates.

Areas Australia is choosing to put money over foreign aid were hinted at, as plans were revealed to lower the company tax rate for all Australian companies, from 30 cents in the dollar to 25, with an estimated cost of $65 billion over 10 years.

The aid sector were dismayed, and Tim Costello, Micah’s Executive Director, lead the charge in warning the government that if they continued to axe the aid budget, they would essentially be depriving the world’s poorest people, while giving out tax breaks. Defence and security circles also vocalised support for increasing aid, not cutting it, recognising the cruciality of aid to strategic foreign policy, and labelling the trend as absurd.

In addition to the OECD peer review, official rankings were announced that saw Australia slip to 19th on international aid. Now firmly in the bottom half, Australia has been called out as one of the major cutters of aid, amongst countries such as Greece and Hungary.

The impact of Australia’s aid cutbacks were discussed, as attention turned to China’s ramping up of aid assistance to our neighbours. Of particular interest were reported discussions between the Chinese and Vanuatu governments around a military presence in the pacific on the island nation.

Minister for International Development and the Pacific, Senator Concetta Fierravanti-Wells, made a number of recent headlines in discussions around Australia’s aid. Her comments on China’s aid in the Pacific caused others to critique Australia’s desire to maintain a monopoly of influence in the region, but unpreparedness to positively invest into its people. During the Overseas Development Institute meetings in London, Micah Australia's own chairman Roger Burton had the opportunity to address Senator Fierravanti-Wells about this portrayal, questioning her remarks about the unwillingness to invest in aid stemming from the Australian public themselves. This spurred a week of renewed debate back home in Australia as aid was in the headlines once again thanks in large part to Micah.

The Lowy Institute poll sighted by the Senator indicated that increasing aid is not popular among majority of Australians. The poll found that 73 per cent of Australians think the current aid budget of $3.8 billion is either "about the right amount" or "too much". It was quickly pointed out that the same Lowy Institute poll also demonstrated a similar percentage of Australians thought the same in 2015 when the aid budget was 30 per cent higher at $5 billion. This result is likely more indicative of a general lack of understanding. Without context it is difficult to know the real-life impact of $3.8 billion, and how it stacks up globally.

Far from an unwillingness to extend assistance, backlash to these comments highlighted that many Australians erroneously believe our aid is far more generous than it really is, and are actually more generous than their government:

"Last year the biggest share of online charity giving in Australia was to aid and humanitarian charities. Over 1.6 million Australians gave $920 million from their own pockets"

The Pacific region to which the majority of Australia’s aid is directed got more attention as Julie Bishop asked the UK to consider redirecting a portion of their ODA to these nations, now that they are leaving the EU - to which they recently obliged.

What does this mean for aid and the budget?

The activity over the past few months is telling of what influences Australia’s commitment to aid. The dominant voice feels like Australia does enough, and is not in a position to be any more generous than we are. The paradox is; this approach at a governmental level is not necessarily reflective of the Australian people.

That we are at our lowest level ever of giving Australian aid is completely incongruent with a nation who sees themselves as on the side of the ‘battler’ and ‘underdog’. A nation that would see itself as a leader for freedom, development and democracy in the world, not a lagger.

There is another voice on aid. Ones like Jody Lightfoot’s that remind you, when you take a step back, that Australian aid helps children with disabilities, rebuilds health centres after disasters, implements infrastructure that improves the livelihoods of thousands of people. In short, Australian aid saves lives, and Australians need to know this.

Another place this view is shared, is of course, the Bible. Philippians 2:4 exhorts “Let each of you look not to your own interests, but to the interests of others.” This passage encourages us not to even consider our own necessities, but to wholeheartedly rank the needs of others as more important than our own. We are asked not to worry about our own lives, God provides our needs (Matthew 6:25-27), our only concern is to share what God provides us with others.

The aid budget seems to rely more on the popularity of the cause from opinion polls, and strategic advances in Australia’s national interest, rather than as a response to the genuine need of the 767 million people still living under extreme poverty today.

Defending the aid budget is no easy task. Voters are not directly affected by changes, and other than nominal commitments, there is no protection against further cuts. As compassionate Australian’s, we must not let the consistent reduction of Australian aid become normalised or something we are comfortable with.

Deputy Prime Minister Michael McCormark recently said “We want people to cheer this budget home”. This budget may contain some great outcomes, but for as long as we fail to make a courageous and consistent effort to empower the lives and fulfil the basic rights of our fellow humans - how can we support it?

How can I speak up on this issue? 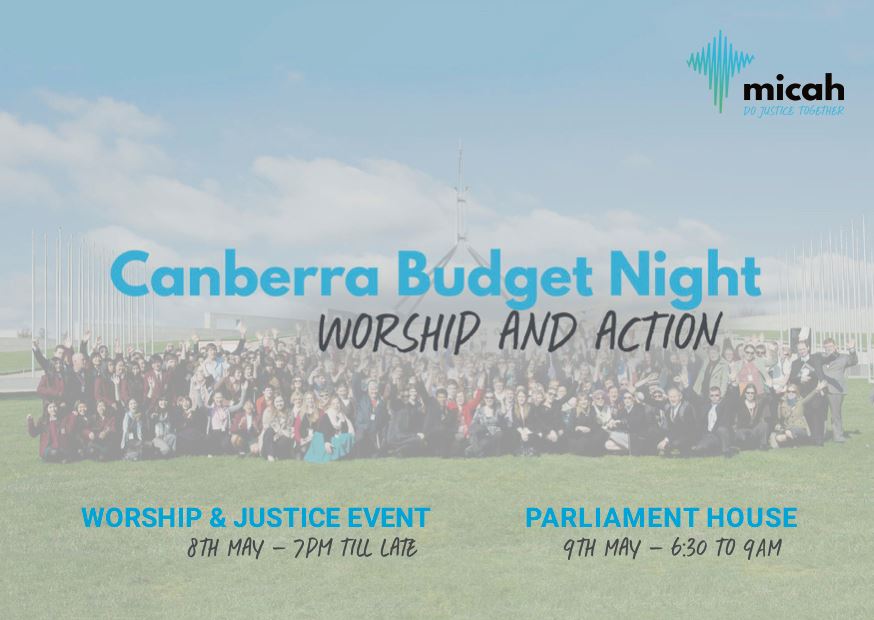 Micah Australia is inviting all young Christians from across Australia to join us next Tuesday night in Canberra for a night of worship and prayer followed by a rally on the lawns of Parliament House on Wednesday morning. Come and stand with us and raise a voice for the world's poor.

Make your way to Canberra on Tuesday 8 May and join us from 7pm for a night of worship, prayer, inspirational speakers and of course ... the budget!

Early the next morning, we will gather on the front lawn of parliament house for our own media event from 6:30 AM- 9:00 AM. Standing as a large representation of young professional Christians who care for the poor, we will ask several of you willing to be key spokespeople to deliver our message politely and warmly to waiting media.

Tickets for this event can be purchased at Eventbrite.