Whatever else can be gleaned from tonight's budget, one thing is clear. This Budget marks the moment Australia became the least generous nation that we have ever been.

We prayed and spoke out so that we would not, as a nation, choose to balance the budget on the backs of the poorest. But that is what has happened. The additional $224 million cut to Australia's aid program this year brings our aid budget to its lowest ever level – just 23 cents in every $100 of our national income (0.23% of Gross National Income). It will fall even further as a proportion of our income in the years to come.

This cut was first flagged in December 2014 by Treasurer Joe Hockey, but it's been carried through with utilitarian indifference by Treasurer Scott Morrison, whose maiden speech included an impassioned plea to increase (not cut) aid: "The need is not diminishing, nor can our support. It is the Australian thing to do."

Under tougher budget circumstances, the British Government made the choice to increase its aid contribution to the international target of 0.7% GNI. Many other aid contributing nations have also been lifting their contribution to global anti-poverty cooperation. Among the 27 wealthy donor nations of the OECD, Australia will now fall from 13th to 16th largest aid contributor (relative to the size of our economy).

Let's be clear: this was a choice. Once again, the aid program (already cut by around one-third since 2012-13) makes up a substantial proportion of Federal Budget cuts, although it represents only 0.8% of Government spending. 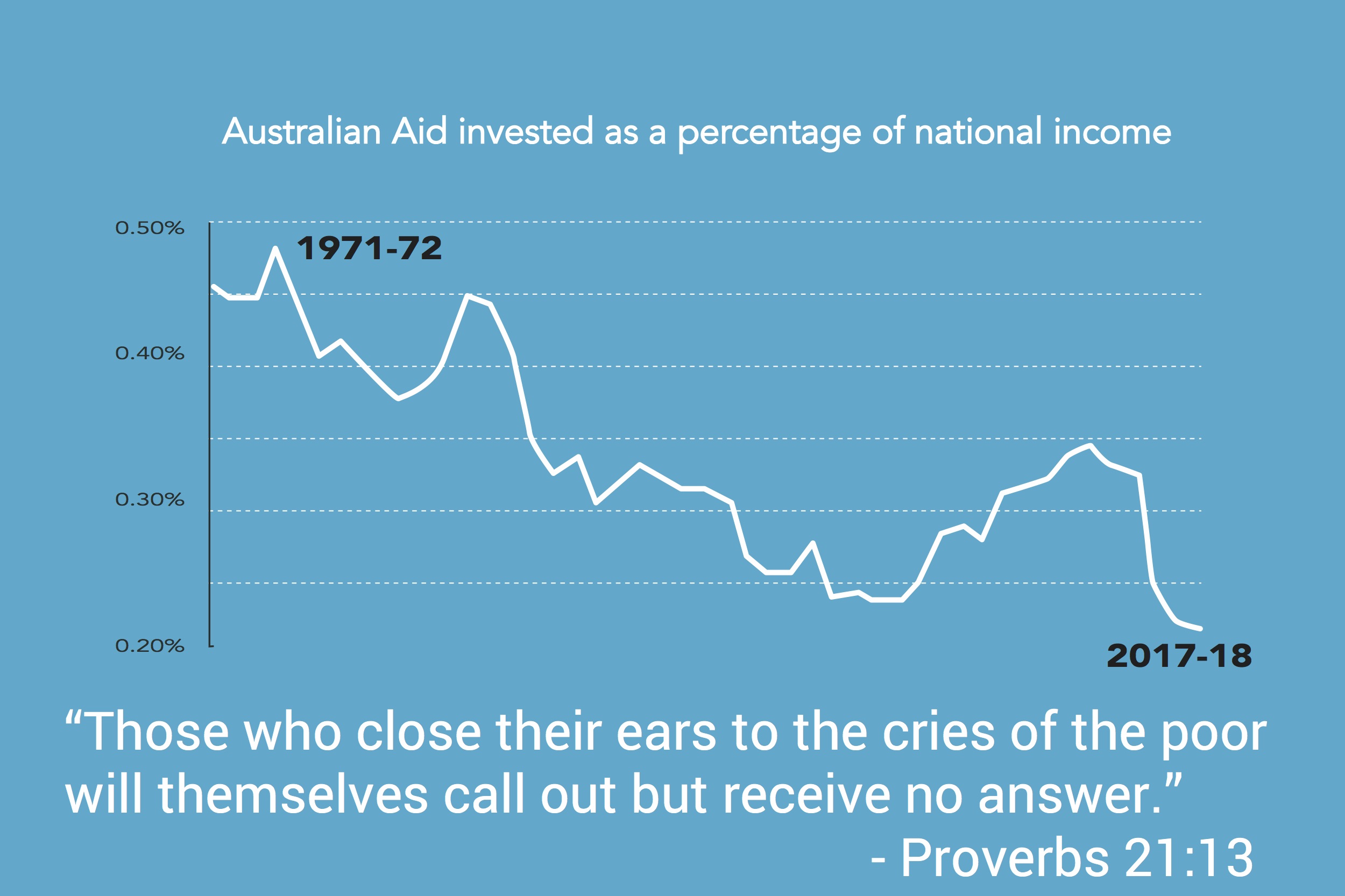 We should not be walking away from those in need. Our region is the most vulnerable to natural disasters and faces increased instability and risk because of this. Our aid investments in health and education are being cut faster than in other sectors, despite the pressing challenges in global health and the power of education to drive empowerment of women and girls, boost productivity, and contribute to stability and prosperity.

We call on the Government, and on all political parties, to draw a line under this era of aid cuts and start drawing up a plan to contribute again as strongly as we should to the fight against poverty and return to the generous nation that we once were.

Thousands of Micah supporters have contacted both the Foreign Minister Julie Bishop and Treasurer Scott Morrison over the last few months. Our voices have not been raised in vain. Over the next few months, we will be working with churches around the country to engage every candidate standing for election, to call on them to be champions not only for their electorate, but – as representatives in our national Parliament – to be champions for Australian aid, one of the ways we contribute to the fight against global poverty.

“If you ill-treat the poor, you insult your Creator; if you are kind to them, you show Him respect” – Proverbs 14:31

If there is a silver lining in the budget for us (and we'll leave it to others to explore what it means for education, health, and the like) it is that the Government has announced new initiatives to tackle multinational tax avoidance. For years Micah has called on our nation's leaders to combat tax avoidance, which robs Australia of revenue we need and, equally importantly, robs developing nations of the resources they need to tackle poverty.

We welcome the measures to boost the capacity of the Australian Tax Office to target multinational tax avoidance, and increased penalties for those companies that don't properly disclose. Similarly, the increased protection for whistleblowers should help to expose more schemes like those revealed in the massive Panama Papers leak. To ensure that developing countries are better able to benefit from the increased focus on multinational tax dodging, their country-by-country reporting should be made public.

To help ensure that disclosure of the true owners of shell companies are revealed, whistleblowers are protected, and other measures to stem tax avoidance do not get forgotten by the Parliament, sign our petition to the Senate here: http://www.micahaustralia.org/petition_for_tax_justice

And once you have done that, please watch for, and join, our election campaign actions, which will be rolling out soon. We aim to bring churches and candidates together across the country to speak and act as champions for Australian aid. If we are to change the course we are currently on, we all need to act and speak together.

At this point, most of the country allocations have been left unchanged in dollar amounts from last year (which means a cut in real terms after inflation). Regional programs and contributions to global health programs have all been reduced in this budget – but DFAT says this is just to reschedule payments, and those programs are not being cut.

Hey Lyn, thanks for your comment. Sadly, the truth is that we don’t know how the $224 million cut will be applied, and which programs will be cut or scaled back. In fact, it’s still not clear how all of the $1 billion cuts from last year are being applied!

The dollar amounts for most country programs stay the same (which is a real cut after inflation) although regional and global programs (especially health) all take a cut. DFAT says that this is just a rescheduling of payments and that the obligations will be met in full. But we don’t know how they’ll catch up with these payments in future budgets, nor which country programs might be cut in order to catch up.

It would be great to get some analysis on where the AUD 224M is being cut from. Also, whether cost of asylum seeker policies are still being “found” in the Aid budget.
Thanks