I’ve recently had a couple of people ask me about advocacy. “Does it actually make a difference?”. “Wouldn’t the time you spend doing advocacy be more effectively used doing something else?”

Something nags at me in answering these sort of questions, because they’re the same questions I ask myself from time to time.  Despite seeing firsthand the powerful work of advocacy in raising a collective voice, despite the real and tangible differences made in poor communities across the world, despite believing that Jesus calls each of his followers to be justice advocates – these questions still come to mind.

One of the greatest challenges about advocacy for me is learning again, with each interaction, the way of advocacy that Christ modelled for his disciples.  The model where faithfulness rather than effectiveness is the priority.

Matt Anslow put it best in his sermon from 2012 titled Christ the slain King: faithfulness in a world of effectiveness.

“In God’s economy victory is won through the faithful testimony and suffering of the Lamb.  In this perspective, Christ is a model for discipleship in which doing what is right, faithful and just always takes precedence over what is effective.”

That’s right, “doing what is right, faithful and just always takes precedence over what is effective”. I find myself going back to it again and again.  Usually when I feel disheartened by the response of our Government or community to issues of justice. And years later it has still stuck with me.

The thing about seeking faithfulness (seeking to follow Jesus and act as He would) rather than effectiveness (seeking the outcome we think is best and acting in a way to achieve it) is that it gives us the freedom to stop trying to tightly control, contort and engineer the outcome of our advocacy. 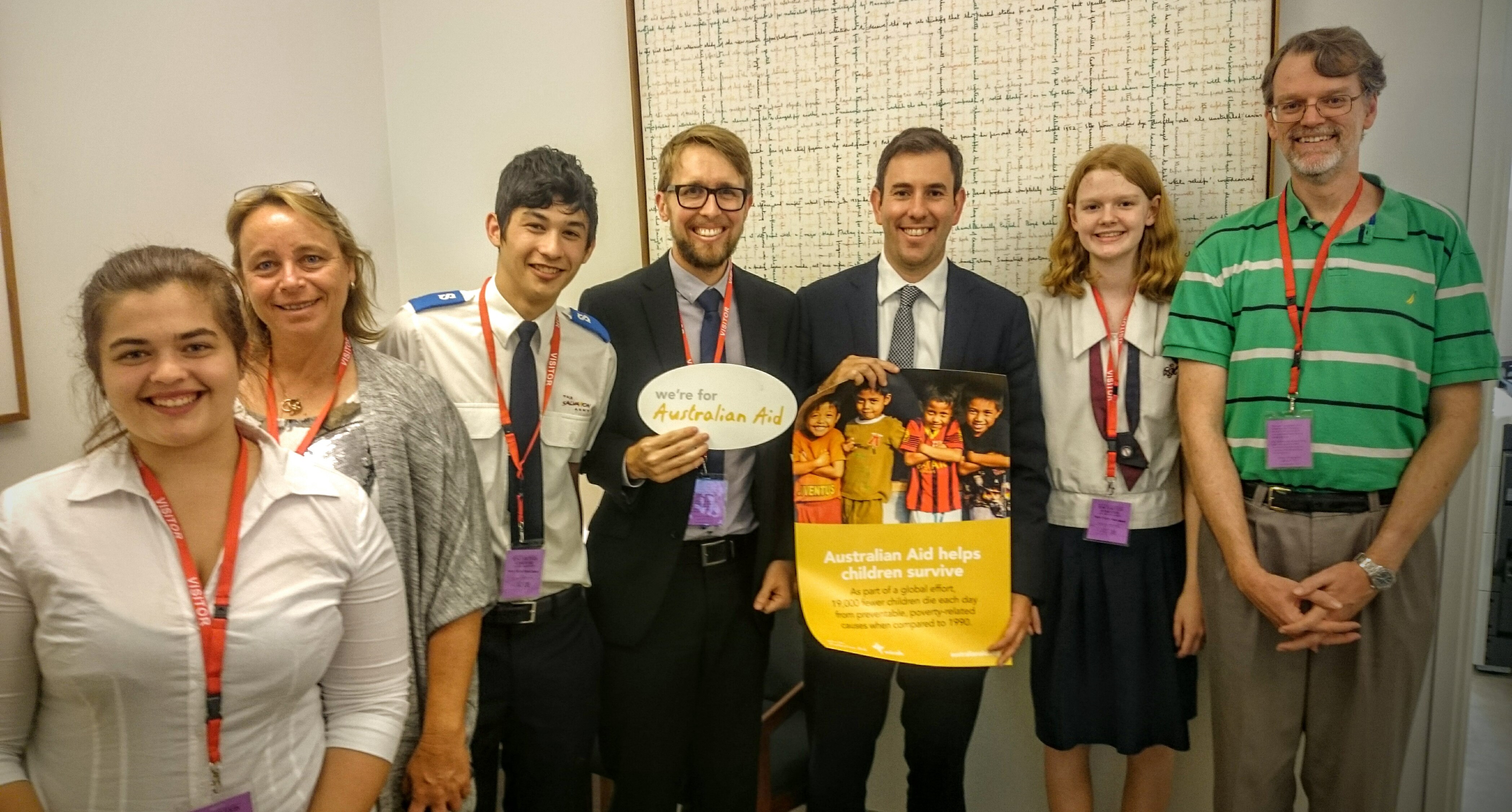 Benton and his QLD lobby group met with Dr Jim Chalmers MP at Voices for Justice 2015.

Jesus gives us the ultimate example of faithfulness over effectiveness in His resurrection.  With His death on a roman cross, Jesus must have seemed like the ultimate failure to his disciples.  And yet, the apparent failure of Jesus, was the ultimate example of God working faithfulness into his plan to restore and redeem all creation.  This is the way of Christ.  Letting go of our desire to control the outcome and trusting that, as Paul writes in Colossians 1 - “all the broken and dislocated pieces of the universe—people and things, animals and atoms—get properly fixed and fit together in vibrant harmonies, all because of his death, his blood that poured down from the cross.”

This is why our advocacy is alive with hope.  It’s not for us to control the outcome. It’s for us to be faithful advocates for justice in the places and contexts we have been placed.  It’s for us to trust that God is working our faithfulness, even in the midst of our own brokenness, into his redemptive plan to restore and remake all of creation.

Just as life and faith are better in community, so is advocacy.  Over many years I have seen the community of people that are Micah Australia advocates, live and breathe hopeful advocacy – committed to being faithful, rather than a particular outcome. And as a movement, this is exacting what Micah Australia is seeking to do - gather, inspire and empower faithful advocacy with and for the poor and marginalised.

So when I’m asked those questions, what’s my response? I’ve seen advocacy make a difference in the lives of the poor and the marginalised ($16-18 billion in additional aid to poor communities through advocacy on the Australian Aid budget and the Millennium Development Goals). But despite the outcomes (encouraging or otherwise) the purpose of advocacy isn’t to necessarily achieve any particular outcome or level of effectiveness, the purpose is to faithfully respond to Jesus’ call to advocate with and for people in poor communities.

“Does it actually make a difference?”

“Aren’t there more effective ways of getting things done?”

I’ll continue to remind myself of the seemingly upside down ways of God’s kingdom and these beautiful words from Mother Theresa: "God has not called me to be successful, he has called me to be faithful."

Our purpose and charge isn’t “effectiveness”, it’s doing what is right, faithful and just.

Benton Wecker has been advocating with Micah Australia for the past seven years. He is a climate change policy advisor.