Hundreds of Christians have converged on Australia’s Parliament House this week to meet with politicians and ask them to increase the nation’s commitment to Australian Aid.

They’re in the nation’s capital as part of Micah Australia’s Voices for Justice, a gathering of Christians to learn how to engage with federal politicians on issues around global poverty.

Armed with clear, specific ‘asks’, facts and personal stories, each individual knew what they were asking for when they met with politicians of every stripe.

“I believe global poverty is an issue that Australia has a real capability to deal with,” says 22 year-old Jason Kelly from Melbourne.

“We’re such a wealthy nation. We can do more than we are. And increasing Australian Aid in the region can make a huge difference to how our region copes with crisis. Australian Aid really does lift people out of poverty.”

Jason’s a law and commerce student from Monash University who has recently completed his fourth year. His results are due out today, but he’s not planning to look at them until after the day’s meetings are done. He wants to stay focused on the task at hand – meetings with Labor MPs Tim Watts and Peter Khalil.

And does he have a strategy about what he’s going to say in these meetings?

“I want to tell them why I care about Australian Aid and the difference I believe Australian Aid can make. Aid is not a number. It’s not a percentage. It connects directly to people’s lives.”

At Jason’s church – Bayside Church, a pentecostal church in Victoria’s southern suburbs – he has met several members of the Rohingya community who’ve benefited directly from Australian Aid. It’s not an abstract justice issue for him.

He says he’s not the “protesty type”, although he thought it was fantastic to see school students protesting last week over things that will affect them, including climate change.

“Protesting is important,” he tells me. “It’s all part of showing politicians you care.”

It’s 8.15am and we chat whilst standing in a huge line of delegates going through security and registering as visitors to Parliament House.

Like Jason, delegates at Voices for Justice have spent the weekend being trained by some of Christianity’s best political engagers – namely, Micah Australia’s Tim Costello and US CEO of Sojourners Adam Taylor, the former leader of the Faith Initiative at the World Bank Group.

After two days of training, Monday is game day, kicking off on the front lawns of Parliament with a 7.30am event that includes a giant newspaper cut out that puts delegates and politicians right in the centre of the story.

“This marks the moment where we transition as a group from preparation to activation,” he begins.

“From across Australia, you have come to lift a voice for justice. A voice of justice for the world’s poor, vulnerable and oppressed, with the men and women of that building,” he gestures towards Parliament House.

“Men and women who, I believe, do care about the needs of others, and do want to see the world made a better place.”

“And as Martin Luther King Jnr said, we are here, because, ‘The church is not the master or the servant of the state, but rather the conscience of the state’.”

We now live in a world where we can truly say that extreme poverty is not a result of there not being enough. For there is more than enough. – Matt Darvas, Micah Australia

Matt goes on to celebrate the significant achievements that have been won in the fight against extreme poverty. Extreme poverty has halved since 1990. The global under-5 mortality rate has declined by 58 per cent. Two billion people have gained access to clean water. There are more girls in school than ever before.

He then points to all that remains to be done, recalling a recent front page news image of Amal Hussain, an emaciated 7-year-old lying silently on a hospital bed in northern Yemen. Just last week, he reminds delegates, Save the Children released a statement conservatively estimating that 85,000 children have died of hunger since the bombings in Yemen began in 2015.

“But their poverty, their starvation – like the poverty and starvation of so many others – is not a result of their not being ‘enough’ in this world, it is squarely a result of injustice. Starvation in Yemen is the consequence of conflict, of violence, and of oppression. A consequence of human sin and brokenness.

Andrew Broad MP (Member for Mallee and Assistant minister to the Deputy Prime Minister), Senator Rachel Siewert (Acting Deputy Co-Leader of the Greens) and Patrick Gorman MP (Member for Perth) each welcome Voices for Justice delegates to Parliament, stressing that this is the people’s parliament.

They also offer delegates advice for the day’s meetings ahead:

“Australia has a long history of people giving a damn,” said Andrew Broad.

Senator Rachel Siewart encouraged delegates to not just share ‘stories’ but to share accounts of lives that have been changed by Australian aid changes.

“Enjoy your time here, share accounts and don’t let them off!” she told delegates.

“Politicians don’t accept meetings with people they don’t want to meet with. They want to hear from you. They will ask you tough questions. Do your best to answer. Say ‘I don’t know’ if you don’t know. Get to your point,” Patrick Gorman advised.

Australia is “lucky enough and wealthy enough” and “smart enough to do more than one thing,” he reminds them.

Nine hours later delegates are halfway through the 94 meetings scheduled for their time in Canberra. One of four scheduled workshops have taken place, along with a Q&A with generous-hearted Labor Senator Claire Moore, and a rather feisty senatorial Question Time.

Debriefing after their day of meetings, one woman tells me about her meeting with Liberal MP John Alexander, saying that the two days of training from the Micah team had prepared their group to respond to every objection he had raised to their request to increase aid funding.

“I came here with no political experience,” says another delegate.

A mother who has brought her two children  shares what it’s like to advocate with her kids.

“So I’m the mother of the sleeping twelve-year-old,” she begins, motioning to her child who has put up a valiant effort all day and finally succumbed to exhaustion. 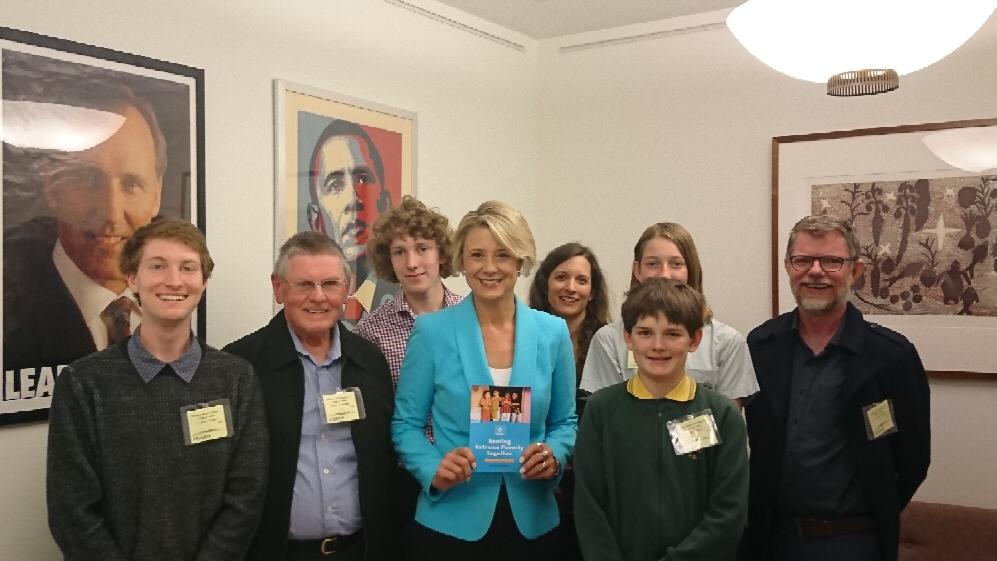 “We saw Kristina Keneally this morning… and she said that it was the best lobby group meeting she has ever had. And she said ‘I’m not just saying that because of the little ones!’”

Exhausted but excited by their engagement with the process of democracy, delegates headed back to their accommodation for sleep and bed.

Tomorrow, it all starts again for these ordinary Christians who put aside four days to go to the nation’s capital and talk to Australia’s leaders about funding programs they will most likely never see, in countries they may never visit, all for the sake of people they will probably never meet.

Anyone who thinks there’s a lack of vision in Canberra just isn’t looking in the right places.