This is the third part in a series of blogs based on Micah Australia’s Submission to the International Development Policy Review.

We are going to look at this question within two contexts – Australia’s Bilateral Program and Global (Multilateral) Program.

Where does Aid currently go?

First, here’s a snapshot of where Australian Aid currently goes, according to the 2019/2020 budget snapshot: 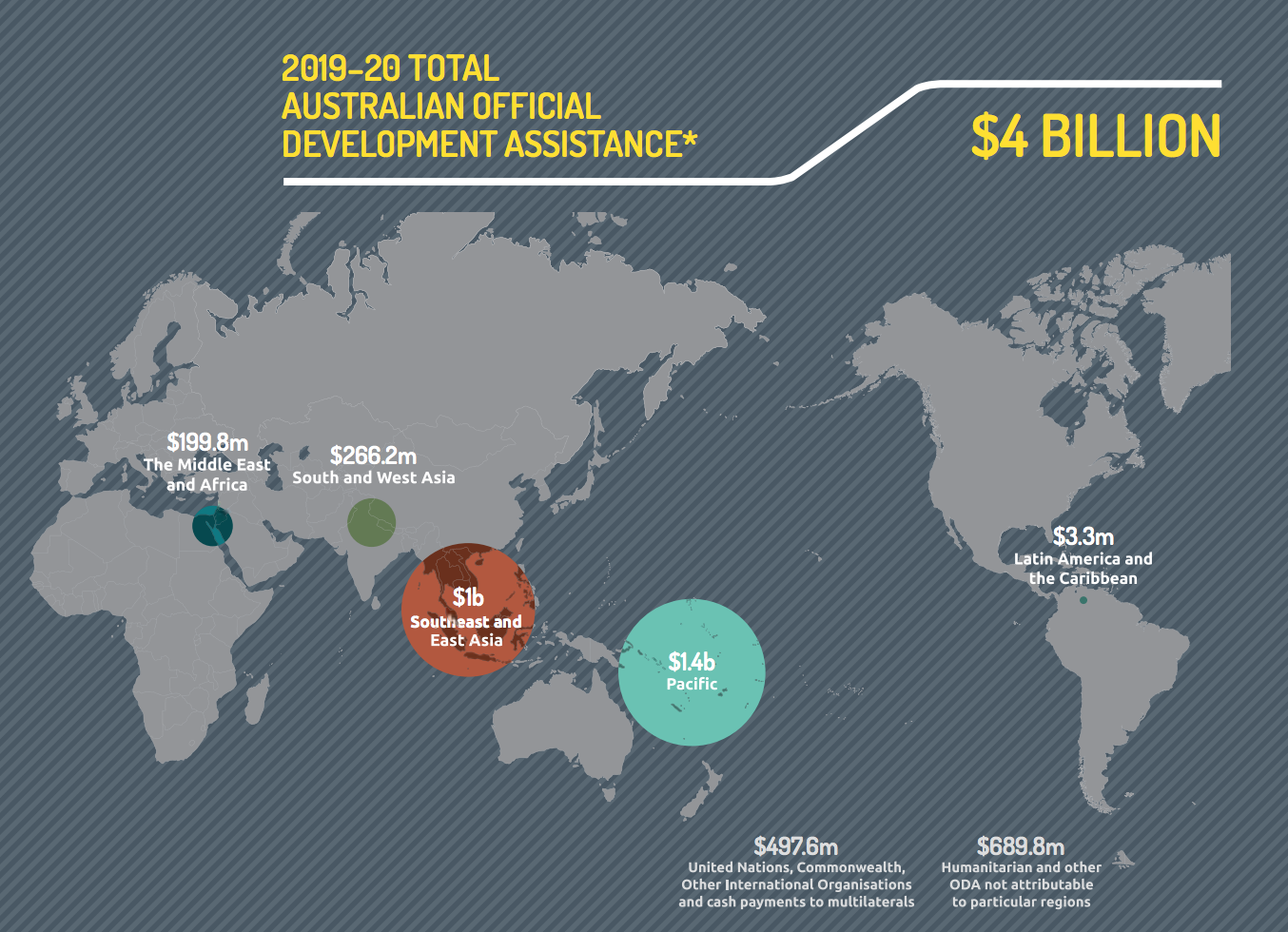 Here’s what that looks like as a percentage (including the Thematic focus): 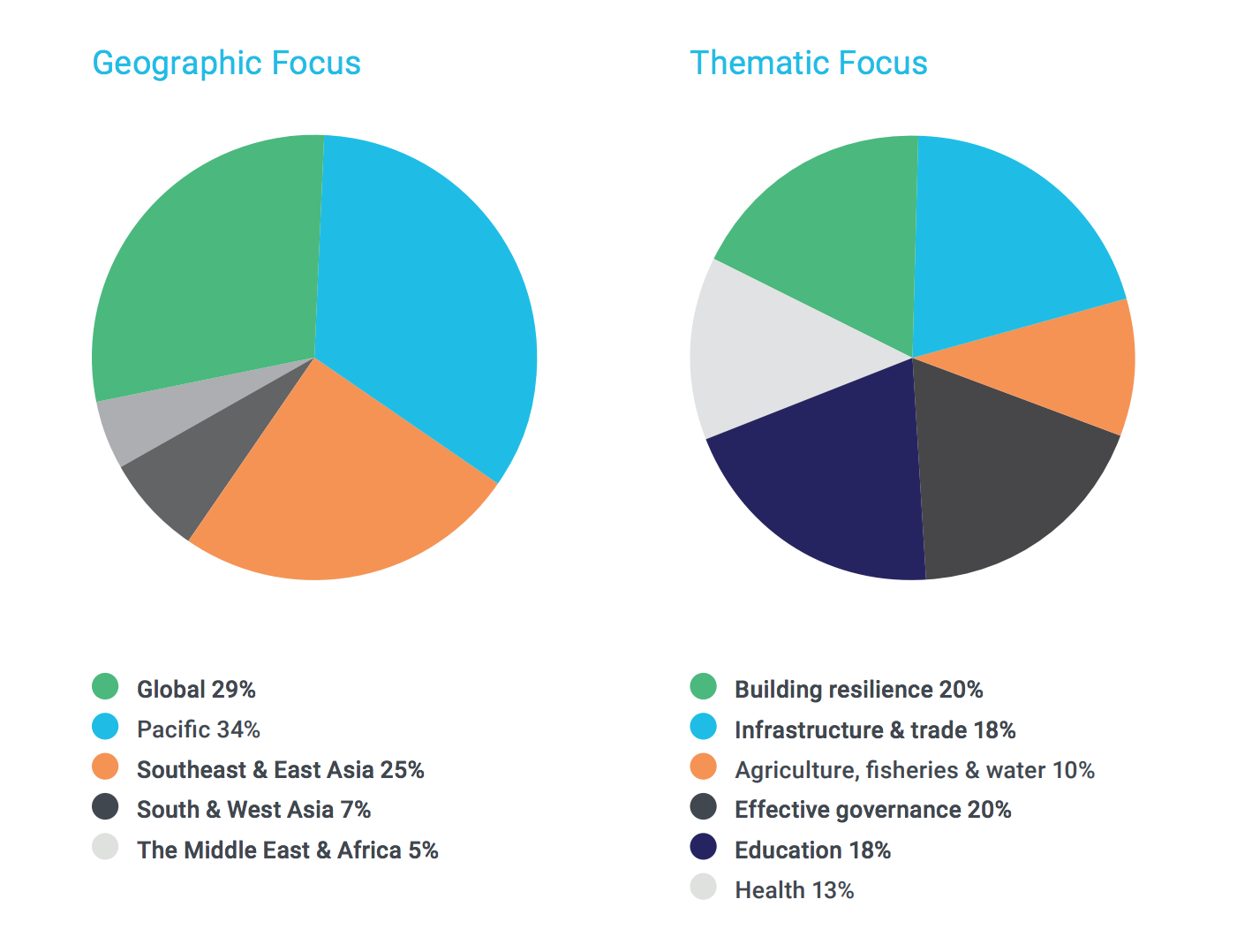 Australia, along with New Zealand, have a unique responsibility in this region for reasons of history, geography and human need.

We agree with the Prime Minister when he says:

“This is our patch. This is our part of the world … We are more than partners by choice. We are connected as members of a Pacific family.”

The Pacific is our family.

And this connection runs very deep and is of utmost importance for Australia.

Many of Micah’s members also have a significant footprint in the Pacific and long-standing partnerships and relationships. Investments should be focused on achieving long-term, sustainable and inclusive development and this should be the benchmark against which decisions are measured.

It is also important to recognise the impact of other policy settings of Australia which can promote or hinder sustainable development in the Pacific.

In this context it is impossible to ignore the existential threat of climate change to the people of the Pacific, where Australia’s own mitigation efforts along with investments in climate finance need to be commensurate to the scale and urgency of the challenge. Such actions are also critical for demonstrating solidarity with our Pacific neighbours, who find themselves on the ‘front lines’ of the impacts of climate change.

Alongside the investment in the Pacific, Australia has recognised its responsibility to the broader Indo-Pacific region through a bilateral program across the Asian region.

But, throughout the past six years the program has borne significant cuts.

While the government has pointed to Asia as a region of strong economic and human development, Australia’s changing aid investment profile in the region has not been necessarily consistent with the places of greatest development. For example, the decisions to end aid to Pakistan and halving aid to Laos, two countries with some of the lowest human development outcomes in the region.

Pakistan in particular is one of the poorest countries in Asia. It was placed 150 out of 178 nations on the most recent United Nations human development index. 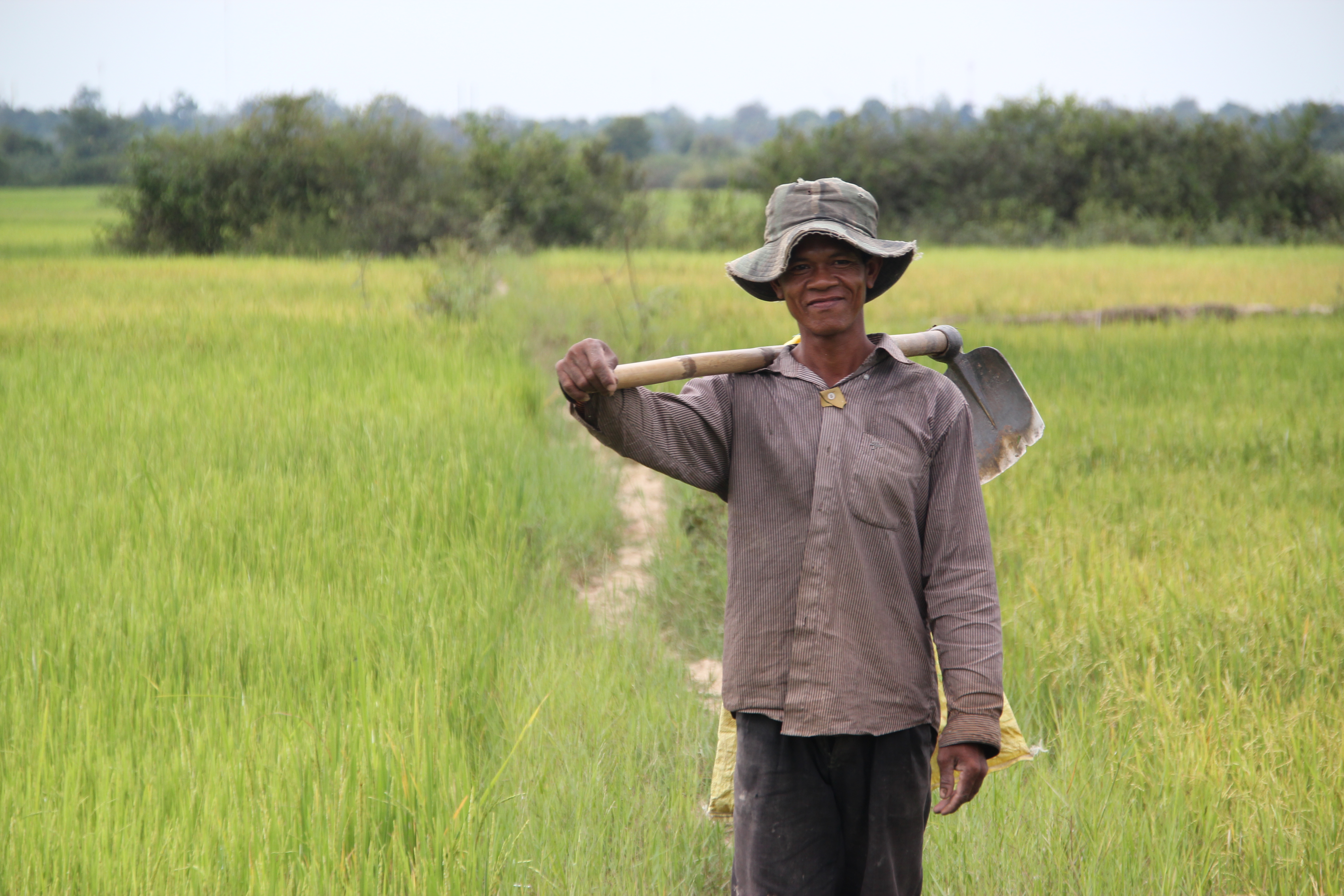 Altogether Aid has been cut to Southeast Asian countries by 42 per cent, while the Pacific has been the only region to have a boost in aid in six years.

Aid in Cambodia was down 33 per cent, Laos was cut 41 per cent, and The Philippines by 44 per cent. Aid to Indonesia and Vietnam — both key strategic partners — has been cut in half over the past five years.

This has and will have a significant impact on Australia’s standing and ability to influence the region.

“Like many other Australians, I’ve been to these countries now experiencing big cuts – Cambodia, Laos, Vietnam – and while development is coming to a select few in the big cities and tourist hubs, poverty is still rife and a daily part of many lives. The Aid review represents a chance for this government to re-engage with Southeast Asia and reconsider our responsibilities in this region.”

This policy review is a vital opportunity to outline clear, transparent principles which will guide bilateral investment, particularly in Asia.

As a fundamental principle, Micah believes that Australia’s development assistance should be needs-based, focused on the areas of greatest disadvantage and those not on track to achieve the SDGs.

While issues such as the profile of other donors, absorptive capacity and Australia’s distinctive value-add are relevant, these should be considered in the context of how Australia makes an investment in countries where poverty is still pervasive and human development is low.

In countries where there is strong economic growth, investments should be targeted towards ensuring the benefits of that growth are shared and translate into human development outcomes.

This should include investments to ensure government services reach the most vulnerable and investments to build the productive capacity of small-holder farmers and micro-entrepreneurs so they can access and benefit from trade. It may also include investments to allow citizens of these countries to be able to hold their governments to account, which is a unique role for civil society. There is also an important role for Australian aid in protecting human rights, particularly of minority groups.

We believe in maintaining investment in the Pacific, but that doesn’t mean we should back out of Asia.

In fact, the Aid review represents a chance for this government to re-engage with Southeast Asia and reconsider our responsibilities in this region.

Our submission to the review has made clear that emerging global threats will need collective global effort in our region and beyond. We are eager to work with the government to ensure Australia’s aid budget is both strategic and moral. - Tim Costello

Micah’s 4th and 5th recommendations to the review:

Recommendation 5: Establish clear, transparent criteria for investment in Asia focused on where there is greatest need, including achieving the SDGs, promoting human rights, protecting minorities and reducing inequality.

One of the significant consequences of the cuts to the development cooperation program over the past six years, has been the effective end to a bilateral program outside of the Asia-Pacific region, most notably in Africa.

However, the current size of the budget, places a burden on the global program as Australia’s only way to make a significant contribution outside the Asia-Pacific.

Pervasive poverty is still predicted to be at its highest in sub-Saharan Africa over the coming decade. 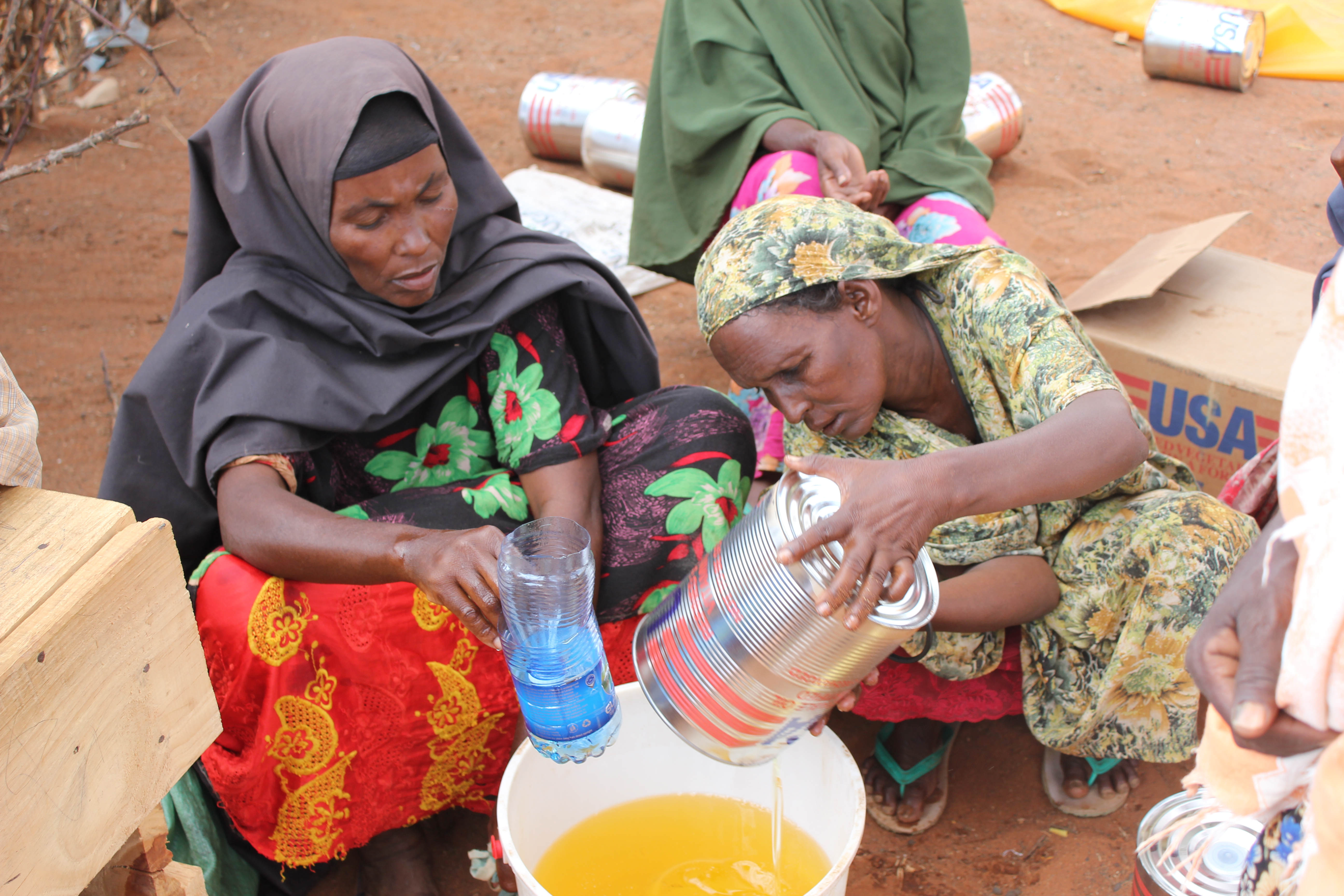 Alongside this, the world continues to face the greatest global humanitarian burden since the World War II with over 70 million people forcibly displaced worldwide, primarily in the Middle East and parts of Africa.

Emerging global threats will need collective global effort. Therefore, there is a strong case to maintain and strengthen Australia’s investment in its global program which currently sits just under 30% of the budget.

Effective Multilateral organisations or non-government organisations are a vital mechanism for extending the reach and impact of Australia’s efforts to parts of the world in greatest need.

The Australian NGO Cooperation Program (ANCP) is a long-standing, innovative and flexible mechanism, with many agencies investing in projects outside the Asia-Pacific in a way that is directly attributed to the Australian Government.

Australia should not step back from its role as a principled middle power in order to step up in its own region.

Australia’s humanitarian investments - including the emergency fund - also sit within the global program and should continue to be distributed on the basis of need in line with humanitarian principles. 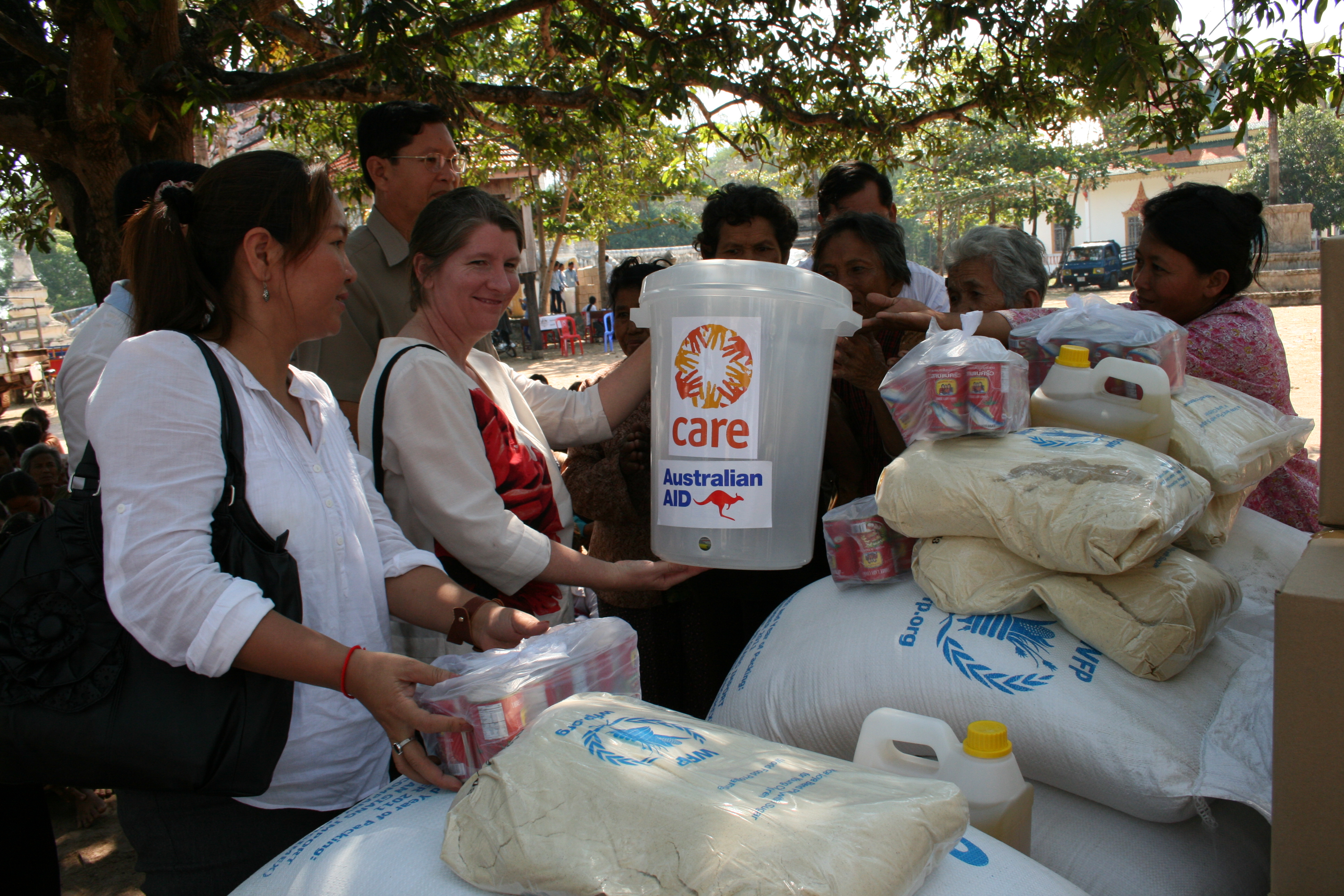 Australia’s shifting aid focus to the Pacific, should not be funded by cuts from an already diminished aid budget, which means lifesaving projects in other parts of the world like Africa, the Middle East and South Asia, are forced to come to an end.

As a wealthy nation we must recognise these vulnerable people are our neighbours too. Neglecting our humanitarian responsibilities elsewhere in the world, is neither the right thing, nor the smart thing, for a middle power like Australia that relies on the maintenance of global peace, stability and prosperity.

For that reason, funding the Pacific Step Up should be done in addition to our existing aid commitments elsewhere in the world and should not be a burden carried squarely on the shoulders of an already diminished aid budget.

Our sixth recommendation to the review: