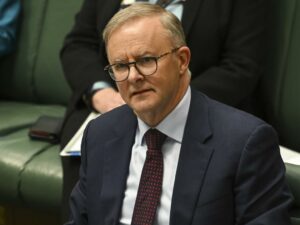 Anthony Albanese has been asked to commit $150m in emergency relief to stop an “unfolding global humanitarian catastrophe”.

Australia should deliver an urgent $150m package to “hunger hot spots” in the Horn of Africa, Afghanistan, Syria and Yemen, a coalition of leading aid organisations says.

The “Help Fight Famine” alliance of 23 Australian development agencies is lobbying the Albanese government to increase its spending on foreign aid before Treasurer Jim Chalmers delivers his new federal budget on October 25.

In a budget submission paper released on Monday, the alliance argues the war in Ukraine, the pandemic and extreme weather events have created a “perfect storm” of hunger which risks killing more people than Covid-19.

The number of people facing acute hunger has almost tripled since 2019, from 135 million to 345 million, the submission paper says.

Some 50 million people are on the brink of famine, and every night 811 million people go to bed hungry, with the numbers reflecting an “unfolding global humanitarian catastrophe”.

“Covid-19 doubled the number of people living with life-threatening hunger. Between climate change and soaring global food prices, the worst may be yet to come,” he said.

“Anthony Albanese faces his first humanitarian test as prime minister after declaring international aid for developing countries was both the right thing to do and in Australia’s national interest.”

Help Fight Famine is also calling on the Albanese government to make a long-term investment in a global food security strategy and to increase Australia’s development assistance to the Asia Pacific region.

Mr Costello and other members of the alliance will launch their campaign in Canberra on Monday.

The development organisations will be hoping the Albanese Labor government is friendlier to broad based foreign aid expenditure than its Coalition predecessors and willing to commit $150m in emergency relief despite significant domestic debt and other economic troubles.

Help Fight Famine says the funding would go towards measures such as food kits to be delivered by humanitarian agencies with “strong networks of local partners on the ground”.

Caritas Australia – one of the organisations in Help Fight Famine – has conducted a survey to bolster the group’s call for the aid package.

According to the poll of 1011 people, 70 per cent of Australians believe the global community should do more to support the poor.

Some 29 per cent believe the government needs to do more to help with the food crisis in the Horn of Africa.

Caritas Australia chief executive officer Kirsty Robertson recently returned from Ethiopia where she said the “horrifying conditions” were some of the worst she had seen in more than 20 years in the aid sector.

“There is no question – we must do more to stave off the impending humanitarian crisis before more lives are lost,” she said.